Haaretz: Most influential Jewish leaders in Turkey are silent about Armenian Genocide for decades

Condolences on the death of Andranik Hovhannisyan, deputy of the Parliament of Western Armenia 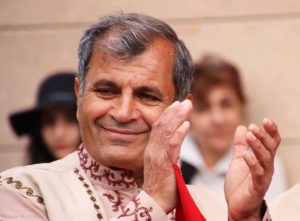 It is with deep regret that we inform that on April 26, 2020, at the age of 65, after a serious illness, the deputy of the National Assembly (Parliament) of Western Armenia, a prominent representative of traditional Armenian culture, the soloist of the «Akunq» («ԱԿՈՒՆՔ») ensemble Andranik Hovhannisyan, died.

Andranik was one of the first members of the «Akunq» ensemble, performed in different countries of the world, presenting the Armenian song and inspiring our compatriots in the Diaspora. He also led the ethnographic ensemble «Van».

Being a descendant of those Sasunian (from Sasun region of Western Armenia) Armenians who lived with longing in their hearts for their Homeland — Sasun, Andranik Hovhannisyan at the same time always maintained hope and faith that the day and hour of the triumph of Justice and the Liberation of his Historical Motherland would finally come.

And as the keeper of the Armenian hearth and the father of the family, he conveyed these exalted feelings to his children, who today live with these Armenian values. It is from these patriotic feelings that the face of a real Citizen and Armenian is formed.

We always highly appreciated the patriotic activity of Andranik Hovhannisyan in the field of cultural heritage, his significant contribution to the distribution, development and preservation of the Armenian national song and dance, as well as his responsible role as a member of the Standing Committee of the National Assembly (Parliament) of Western Armenia on cultural issues.

On behalf of the state structures of the Republic of Western Armenia, we express our deepest condolences, and we wish steadfastness and fortitude to the family and relatives of Andranik Hovhannisyan.

In this difficult hour, with heart and thoughts we are with you, and share the pain and sorrow from the irreparable loss.

Radik Khamoyan
President of the Republic of Western Armenia (Armenia)

****
Translated into English by Vagan Babakhanyan